Four Girton Grammar students will be testing the famous J.M Barrie quote from Peter Pan, “The moment you doubt whether you can fly, you cease for ever to be able to do it,” when they take to the air on bungee cords during the school’s production of Peter Pan – A Musical Adventure, at the Ulumbarra Theatre. 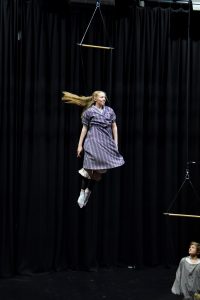 The students, who portray the Darling siblings Wendy, John and Michael along with Peter Pan, today undertook an airborne rehearsal on elastic bungee cords especially rigged up in the school’s Black Box theatre.

Head of Drama at Girton Grammar School and Director of Peter Pan, Mr Nicholas Pease, said that the school theatre had been transformed with a temporary truss system to allow the students to ‘fly’ in preparation for the show opening on June 14. 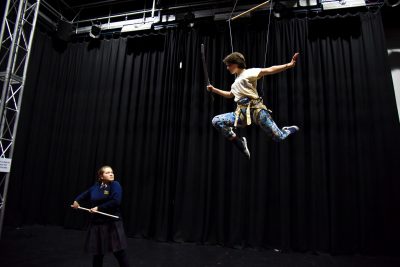 “Peter Pan is visually big and we want to make sure we encourage the audience to let their imaginations fly by creating scenes that are spectacular.

“Second star to the right and straight on ’til morning” will be more believable if the characters can make the audience trust that anything is possible.

“This is an incredible opportunity for our Drama students to experience something unique and we try every year to create a show that gives the students a sense of what it might be like to be part of a professional theatrical production,” Mr Pease said.

The students will be trained by professional rigger, Mr Christian Schooneveldt-Reid, who works extensively for Circus Oz. Peter, Wendy, John and Pan will fly 6 metres high, making for truly engaging moments. The bungee cords allow free movement so that the actors can run in any direction and enjoy free movement in the air.

“This year’s production, as always, is ambitious and we will be putting on three shows at the 1,000 seat Ulumbarra Theatre, so our students will experience acting in front of a large live audience.

“The Senior School productions are self-funded through ticket sales so our student publicity team is working extremely hard to support the show and sell the house out.

“Our take on the original play will be a little darker than audiences are accustomed to but there is also plenty of action and humour, making this a show for all ages,” Mr Pease said. 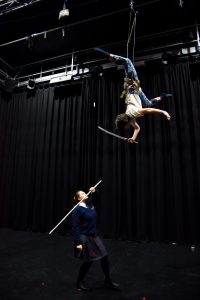 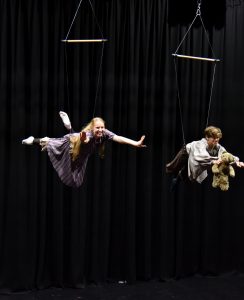