Girton Grammar School has started Science Week with a very intentional drip, announcing that their team of Year 10 Science students are the overall winners of the 2016 Amazing Spaghetti Machine Contest, for design and construction of an ingenious plant-watering invention.

Coordinated by the Melbourne School of Engineering, The Amazing Spaghetti Machine Contest is an annual competition open to Year 10 students in Victoria, who put their knowledge and skills in Mathematics, Science, Engineering, and Project Management to the test in the creation of a ‘spaghetti machine’ – an overly complex machine or device that is used to perform a relatively simple task.

“This is the fourth time our Year 10 Science students have won this Award so it’s inspiring to see the sustained interest and effort in Science at the School.

“We have also won the ‘People’s Choice’ Award in this competition three times and will continue to encourage our Science students to immerse in Science beyond the classroom through activities such as this.

“The automatic watering machine that the students built is impressively engineered but the teamwork required to build it is equally remarkable.” Mr Maruff said.

The winning Spaghetti machine is on display at the School for the duration of Science Week and to keep inspiring fellow students to become immersed in STEM (Science Technology Engineering Maths) subjects, the Girton Racing Team is also displaying their high-tech Energy Efficient Vehicle.

The vehicle was raced in the prestigious Shell Eco Marathon earlier this year in Manila, where the team was the only Australian Secondary school selected to compete in this international event.

The team hopes to be selected to compete in the event next year in Singapore and is currently modifying their vehicle design to travel even further on less fuel.

Headmaster at Girton Grammar School, Mr Matthew Maruff, said that the students hoping to go to Singapore are strong in Mathematics and Systems Engineering.

“Team members are currently working on enhancing the existing ethanol fuelled vehicle by reducing drag and overhauling the ergonomics of the cockpit and controls for greater driver efficiency.

“Designing, building and testing this futuristic Energy Efficient Vehicle exemplifies the STEM skills that will be required of our innovators of the future.

“The team hopes to minimise the electrical energy consumption on components such as the electronic fuel injection system and starter motor.

“You won’t see an Energy Efficient Vehicle in this country built by school students more advanced than this one,” Mr Maruff said.

Girton Grammar School has a strong reputation in STEM subjects and a long history of student participation and achievements in a range of awards and programs which in 2016 include:

“It is up to schools to nurture the next generation of technical experts and we are certainly doing that at this School, including offering nine Technology subjects,” Mr Maruff said. 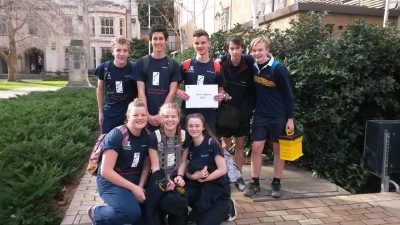