In an impassioned ninety seconds, Year 11 Girton student, Lily Ivey, convinced a panel of judges representing parliamentarians of the importance of tackling eating disorders, and in the process, won the 2021 Parliament Prize amongst a field of over 630 applicants across Victoria.

The Parliament Prize entails the submission of a ninety-second video made to Parliament from the perspective of an MP, focusing on the issues the MP cares about that affect the local community.

Although she says she does not harbour ambitions to be a politician, Lily is a passionate advocate for raising awareness about eating disorders and would like to influence policy on such matters. 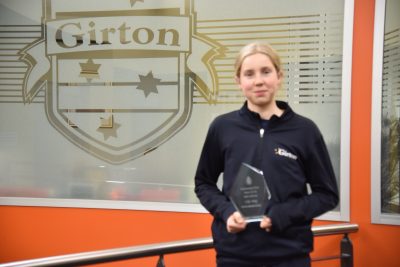 “I don’t think I could ever be a politician, but I would love to study international relations or law at university and pursue a career in one of these areas. Working at the UN would be my dream job!”

“I do really hope some sort of change can come from my Parliament Prize. Hopefully, MP’s will listen to my submission and consider some proactive responses that involve education for young people.

Lily was encouraged to enter the Parliament Prize by her Politics teacher. She was awarded first place in the Years 10-12 category from 633 entries across the state, representing 150 schools. The competition is designed to reflect a sitting week in Parliament where Members of Parliament have a ninety-second opportunity to make statements on matters of interest in their electorate. Students posing as MP’s are judged on the clarity of their message, interesting insights, and understanding of why the issue matters.

Usually, prizes for the competition would be awarded at a ceremony at Parliament House. However, Lily is delighted to have won the Parliament Prize and was content to receive her trophy in the mail.

“The Parliament Prize seemed like a fantastic platform to convey my issue, especially as it involves the people that can create change in the community.

“I know how devastating eating disorders can be, and unfortunately, how appalling our current mental health system is. 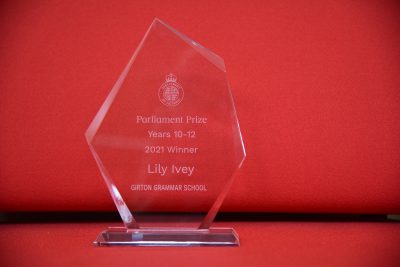 “I chose to speak about this issue with the intention of raising awareness, mostly in the hope of preventing more young people from developing an eating disorder and having to navigate a system that is so inaccessible.

“I think what helped me win this prize is that it’s an issue I’m passionate about, and I guess that came through in my submission,” Lily said.