Eighteen-year-old Girton Grammar School student, Lachlan Archibald, has been selected to play in the Australian under 21 hockey team and will tour Malaysia next year, as well as being named the winner of his School’s inaugural 2019 Caitlin Thwaites Award for exceptional sportsmanship, leadership and integrity.

Named after Australian netball champion and Old Girtonian, the Caitlin Thwaites Award is bestowed on a student who embodies the ethos of the Modern Olympics, combining outstanding success with exemplary personal qualities of leadership and integrity, on and off the field.

Lachlan has represented Central Victoria in the Junior Country Hockey Championships and played hockey for Girton Grammar since 2014. After playing in the Senior Men’s Country Championships in Melbourne earlier this year, where his team won the gold medal, Lachlan was selected to represent Australia next year.

“I love sport and have been involved in several sports over the years including Athletics, Swimming, Cricket, Futsal, Soccer, Australian Rules Football and Hockey. 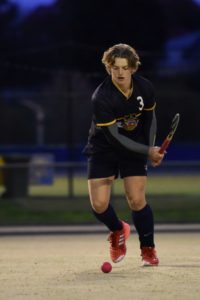 “I am lucky enough to have represented Girton in all of these sports as well as playing for various clubs.

“I am so thrilled to have received the Caitlin Thwaites Award this year because I know the calibre of winner who has gone before me, including Caitlin herself, who was the first person to receive this award when it was known as the Pierre de Coubertin Award.

“Caitlin has been to the Commonwealth Games playing netball and has represented Australia many times in different competitions, and I hope that I might be on a similar path,” Lachlan said.

Lachlan’s list of sporting achievements is exhaustive, and while his sporting talent is unquestionable, it is his conduct beyond the domain of sport that helped earn him the 2019 Caitlin Thwaites Award. Lachlan is well known for being friendly to all and engages readily with people from all areas of the school. His inclusive demeanour is the defining feature of his leadership skills.

“I hope to go to university next year, but I will continue to nurture my sporting passions and am very excited about touring Malaysia next year in green and gold.

“I am leaving school with mixed emotions. I’ve had a wonderful time at Girton but am also really looking forward to taking my sport to the next level,” Lachlan said. 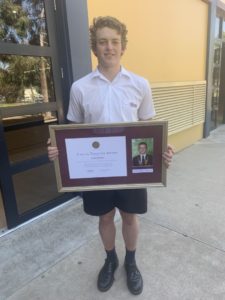