For the fourth year running, a Girton Grammar student has been selected by an independent panel of VCAA Theatre Studies assessors to perform at the prestigious Top Class concert at the Melbourne Recital Centre in March.

Headmaster at Girton Grammar School, Mr Matthew Maruff, said that only 20 students are selected state-wide each year for Top Class and that Bronte Bailey was in Year 11 at the time of selection.

“Our school has a long and rich culture in the Performing Arts and Bronte has always been an active part of all that is on offer.

“Bronte received an A+ in her VCE Theatre Studies exam last year which gave her the opportunity to audition in Melbourne for the Top Class program.

“From the 2016 Year 12 cohort, we also have one student who has been accepted into NIDA and another who will study at the VCA this year,” Mr Maruff said.

Top Class is a concert series that presents the works of outstanding VCE students in Dance, VET Dance, Drama, Theatre Studies, Music Performance, Music Investigation, Music Style and Composition and VET Music. It is part of the VCE Season of Excellence managed by the Victorian Curriculum and Assessment Authority. In her audition, Bronte performed as the character Madame Arcati, from Noel Coward’s 1941 play ‘Blithe Spirit’.  She explains that she performed the piece as a monologue.

“It’s essentially a comic piece which is the genre I most enjoy and Arcati is mysterious and slightly eccentric.

“In the monologue, Arcati is invited to a dinner by socialite and novelist Charles Condomine to conduct a séance in the hopes of gathering interesting material for his next book.

“During the séance she manages to contact ‘the other side’ and there is a great twist in the plot when it turns out she is speaking to the ghost of Mr. Condomine’s temperamental first wife, Elivira,” Bronte said.

Bronte is currently doing Year 12 at Girton Grammar School and would love to have a career in the Performing Arts.

“It’s a notoriously difficult industry to make a living from but there are a number of avenues I would love to explore, even if it takes a while to get exactly where I want to be.

“I can’t think of a better school to prepare me for a career in the Performing Arts. We have incredible Drama and Music teachers who are extremely dedicated and the Performing Arts are genuinely integrated into the School’s fabric,” Bronte said. 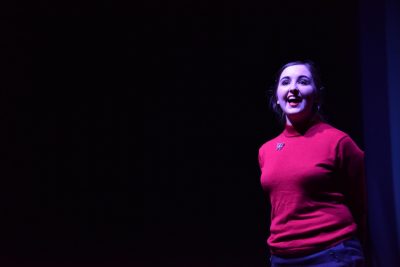