Having recently represented Australia in the International Table Tennis Federation (ITTF) Oceanic Hopes Challenge, Hannah and Olivia Green (both 6 Aherne) have gone on to secure a Local Sporting Championship Grant to support them in their passions.

The State Government grant will help with the costs associated with the girls’ travel, training, equipment and clothing, which will be useful given the amount of travel that this talent duo undertakes, along with their Year 10 twin brothers, who also compete all over Victoria in table tennis.

Hannah won the 2017 IITTF Oceania Hopes Challenge, held on the 6th April at Tweed Heads in Queensland by beating her twin sister and teammate, Olivia, who placed second in the tournament.

As the winner of the event, Hannah has secured a place at the 2017 ITTF World Hopes Week and Challenge to be held in Luxembourg in August this year.

In the lead up to the tournament, all players had a week of training at the Tweed Heads table tennis centre with coaching by top international coaches.

Both Hannah and Olivia, who turned 12 on the day of the final, play in the Bendigo and District Table Tennis Associations pennant competition. As well as playing club competition matches each week, both girls travel to Melbourne every Saturday for training with their older brothers Isaac and Xavier, who are in Year 10 and are also twins and also in Aherne!

All four members of the family compete regularly in State junior tournaments all over Victoria and are currently vying for places in the Victorian State Team for the Australian National Junior Championships in Hobart in July.

Lisa Chesters MP, presents the girls with their grant: 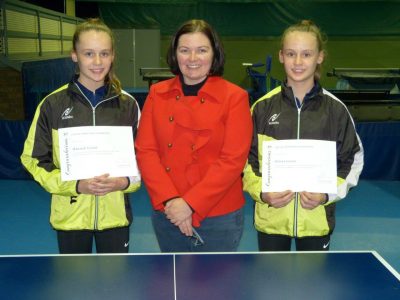