GREEN RACING TAKES TO THE STREETS

With only one series point separating Girton Racing Team’s “Intrepid” from the nearest competitor in the Jet Couriers Victorian HPV Series, this weekend’s EEV/HPV (Energy Efficient Vehicle/Human Powered Vehicle) Grand Prix event in Bendigo will be a nail-biter.

Owing to the huge growth in this event over the past two years, a larger and more suitable race location has been secured with competitors racing around the Deborah Mail Centre Precinct, bordered by Deborah, Abel and Thistle Streets.

Headmaster at Girton Grammar School, Mr Matthew Maruff said that the event demands so many skills of the participants, especially in the disciplines of Science and Engineering.

“The level of teamwork required to design, fund, build and race these amazing vehicles is astounding.

“Girton has the only school team in Australia to be selected to compete internationally in this sport with a team of boys having travelled to Manila earlier this year to compete in the prestigious Shell Eco Marathon.

“The team is currently working on enhancing the existing ethanol fuelled vehicle including reducing drag and overhauling the ergonomics of the cockpit and controls for greater driver efficiency.

“Girton has 4 trikes competing in the Grand Prix this weekend and the design of the vehicles just keeps getting better,” he said.

The Jet Couriers Victorian HPV Series event features Energy Efficient Vehicles (EEV) and Human Powered Vehicles (HPV) competing in a series of 4 races, generally for a 10 hour duration. More than 86 teams will compete in the Bendigo event this weekend, travelling as far as they can and on as little fuel as possible.

“This is a big event for Bendigo and it’s a great spectacle, especially watching the teams work in the pits,” Mr Maruff said.

The Bendigo EEV/HPV Grand Prix will take place on Saturday 20th August, 2016, from 1pm until 10pm. Spectators are welcome to watch the race from any vantage point. The Pits are located in Deborah Street. 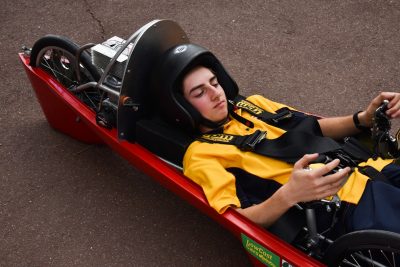