When Liam Richardson (11 Jenkin/House Captain) was just a young boy, doctors told him he would never ride a bike. So he did. Later, following surgery, he was told it would take him 12 months to learn to walk again. But in 3 months he was back on his feet proving the world wrong.

Liam likes defying the odds. He has the kind of determination that might be mistaken for stubbornness when it comes to anything related to living with cerebral palsy, but without an obstinate bone in his body, his quiet resolution is something slightly other-worldy.

Liam is a runner, and a good one at that. He holds three Australian track records for the 100m, 200m and 800m in his age group and has recently qualified to wear the green and gold at the World Junior Championships in Switzerland later this year.

“I’m really looking forward to racing for the country. Walking out on the track in the Australian tracksuit in a Switzerland summer will be amazing.

“I have never been to Europe, only to Hong Kong and Taiwan for horse riding. I used to do dressage before turning my attention to athletics but I hope to return to horse riding one day,” Liam said.

Horse riding is only one sport in a list of several that Liam has turned his hand to at one time or another. Tennis, cricket, basketball, soccer, football, cross country running and swimming are all in Liam’s sporting repertoire and he credits being so physically active as helping his cerebral palsy, which he describes as being a ‘mild’ case, mostly affecting his left leg.

Cerebral Palsy is caused by brain injury or abnormal development of the brain before birth, during birth, or immediately after birth. It affects body movement, muscle control, muscle coordination, muscle tone, reflex, posture and balance. When Liam was younger he had to travel from near Newstead where he currently lives, to Geelong, every two weeks to see a specialist and he undertook intensive physiotherapy to prevent tightening and spasm in his muscles.

In 2008 Liam had multi-level surgery where doctors did many things, including breaking his hip and turning it outwards. When he had specialist follow up appointments, he was shown video footage of his gait from lab analysis that had been conducted years earlier. He was shocked by what he saw. 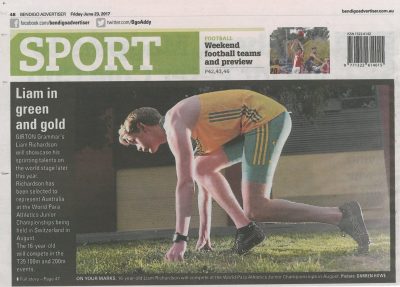 “I could not believe how I used to look when I walked. The surgery has helped a lot,” he said.

Liam competes in a category of athletes called ‘T35’, against other athletes who have a similar level of muscular impairment. The ‘T’ stands for track and the ‘35’ refers to the degree of the angle formed by the leg when it is raised as far as it can go. A person with full range of movement has about a 180-degree range of movement, from when their leg is straight, to when it is raised to their chest.

The categorising of para-athletes is complicated and scientific. Basically, athletes in Liam’s category are tested by independent experts for flexibility and their walking and running gaits are analysed. This analysis gives athletes a national or international classification so that like athletes compete against like athletes.

Depending on the size of the field competing, the winner of a race is either the first over the line, when there are a sufficient number of athletes racing in the same category, or, results are determined against a bank of international data and records of like athletes, if there is a range of differently classified athletes competing in the same race.

Liam is coached by the former team manager of Athletics Victoria, Nick Wall. He has also been coached by Bendigo Harriers President Brett Gilligan and Peter Barrett. Liam says that all of his coaches have been a key to his success.

“Leading up to the Nationals I only had about 4 weeks of training and most of that was in the gym, not on the track.

“So when I qualified for Switzerland, including getting a personal best, my overwhelming reaction was one of surprise.

“My coach asked me to imagine what I might have achieved if I’d had four months of coaching, not four weeks, and I think he has a point.

“It’s probably part of the reason he won’t let me play football just yet, until my potential in athletics has been achieved,” Liam said.

When in full training, Liam travels to Melbourne two or three days per week to train on the track and his coach delegates training to a coach in Bendigo for another two or three days. He goes to the gym on his training days ‘off’, which leaves him with only one actual day off per week.

Liam finds it hard to articulate exactly why he loves running so much but says it definitely has something to do with being free.

“I distinctly remember going to the track one day and having a million things on my mind, including multiple school assignments but I remember when I started running I was able to relax and the stress melted away.

“I felt free and was able to be totally in the moment, taking each stride in as I ran.

“I am also driven by wanting to prove people wrong.

“I’m not the best at doing my physio exercises but I do plenty of hard work and I have quite a lot of self-belief, but not in an arrogant way, I just mean in the sense of wanting to get back amongst my friends to participate.

“I remember in Primary School, in particular, carrying a distinct feeling of needing to get back to running around with my mates,” he said.

Arrogance is the antithesis of everything about Liam. His manner and approach to everything that he does is a living, breathing definition of humility, and this has been recognised in his receiving the Pierre de Coubertin, an international award given each year by the Victorian Olympic Council, which recognises secondary school students who are active participants in sport and display the Olympic ideals of fair play and sportsmanship.

Tokyo 2020 is firmly in Liam’s sights, and so long as he listens to his coach and stays off the footy field, it is very likely we will see this fine young man in the green and gold again soon.