While many students will be happy to officially put VCE behind them today, Girton Grammar School student Blake Reilly, says that Year 12 was the happiest of 13 years at School.

“My final year at School has proved to be my favourite.

“I think it is because of the prevailing sense of optimism throughout the cohort and the way everyone truly believes that their hard work will ultimately be rewarded.

“There is a certain level of excitement for the opportunities that will follow School in the years to come and this results in quite a buoyant atmosphere in the classroom and beyond.

“Personally, my aspirations were a strong motivation for my diligent approach to my studies because I hope to study Law and International Relations at University next year.

“I think it has really helped that I have been able to study subjects that feel relevant to my life for reasons other than merely the upcoming SAC or exam,” Blake said.

Blake chose subjects for VCE that reflect his interests and ambitions including Global Politics, Economics and Legal Studies. He hopes to pursue a career in either Law or Diplomacy and in January, will head to Europe as part of the UN Young Diplomats Tour of Europe, for which he was one of only sixteen students from across Australia selected to visit nine countries in four weeks to explore the complex realities of diplomacy in the 21st Century.

Blake received a School Scholarship for an outstanding departing student and will use the funds to support his UN trip.

“I am so grateful for the wonderful support from both my family and the School over this past year.

“My School education has been an absolute privilege, and something that I am sure I will value often in the future,” Blake said. 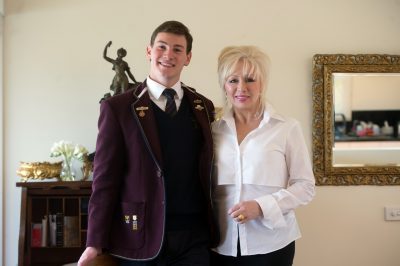