Year 12 student Harrison Waller came to Girton Grammar School in Year 6 but he says that looking back you may not have noticed him because he was typically hidden behind a book or behind a friend. He never saw himself as a leader.

Fast forward to Harrison’s final House Assembly and the picture is different, with his Head of House, Mr. Nigel Vernon putting it best when he said that he has watched, Harrison became Harry.

Now, he is the recipient of the $2,000 2018 OGA Departing Girtonian Scholarship.

Harrison was House Captain for Jones and a House Prefect and plans to use the $2,000 Scholarship to acquire his Real Estate Representatives License, whilst studying a double degree in Property and Real Estate / Law at Deakin University.

During his interview for the Scholarship, Harrison was asked what it means to be an Old Girtonian.

“It’s something that you strive to be. I think it is about being a good person, a good citizen and you want to do your bit.

“It’s about being someone who will help others and have a good time along the way,” he said.

This, he has certainly done through the Sporting Chance co-curricular in which he has been participating for four years and captaining this year. A Sporting Chance is a modified and inclusive sports program for young people with Autism Spectrum Disorder (ASD). Volunteer students work alongside teachers, acting as mentors and coaches and introducing participants to the specific language, rules, and skills that are related to many popular sports played within schools.

“Through A Sporting Chance, I’ve developed friendships, the teachers are incredible and I am in awe of what they do.

“If I were not going to University next year, I would want to stay in Bendigo for this programme. I believe it has shaped me as a person. It makes me want to become better.

“To work with kids who might not otherwise get a shot, it’s amazing to watch them grow,” he said.

Harrison’s teachers say he has a kind heart and a caring nature, that he is well mannered, thoughtful and diligent.

This has been reflected often through being an aid for Junior School classes, a camp leader, a host of Japanese and French exchange students and volunteering in his local community.

To become an articulate and confident departing Girtonian, Harrison has immersed himself in public speaking through DAV debating, PESA speaking competitions, Lions Youth of the Year and even acting on occasion as a Japanese interpreter for the Headmaster.

Harrison is the epitome of what it is to be a good all-round departing Girtonian. He has embraced the school’s values and has a strong sense of social responsibility. He has a close and supportive family and in every way, hopes that his two younger brothers ‘outdo’ him. He plans to support them in doing so as he forges a new life after Year 12.

Pictured: Harrison being presented with the 2018 OGA Departing Girtonian Scholarship by Chair of the Girton Board, Mr David Jemmett, at the 2018 Valedictory Dinner. 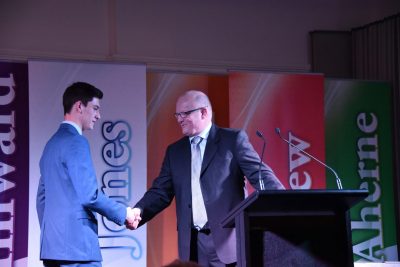 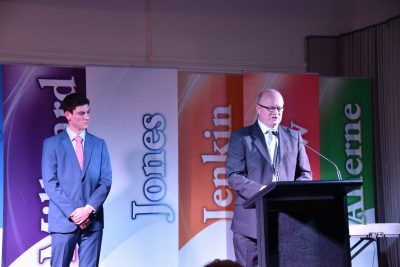 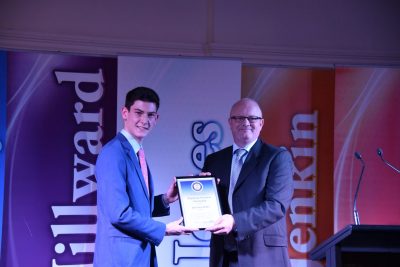