Oliver first got involved with audio and light production through the Girton Grammar Theatre Tech co-curricular activity offered at the school.

“In Year 7, I decided to join the Theatre Tech co-curricular because a friend was involved. Within weeks I was really into it and was putting my hand up to be involved in the sound and light at various school events as often as possible.

“There are so many events at Girton where Theatre Techs can get involved, working side-by-side with the professionals who are employed at the school.

“For example, at Foundation Day last year, I mixed the audio that was supplied to the event’s live stream, so everything that people heard went through my sound mixer. My job was to make sure that all of the spoken audio and instrumental music sounded balanced, clear and at an appropriate volume.

“This event formed one of my assessments last year, so the overlap between curriculum and co-curriculum for this subject at Girton is incredibly valuable.

“At an event like our Swimming Carnivals, I have been supervising younger students and helping them do things like devise music playlists and running audio so that the event MC can be heard.

“We have programmed the music mixer so that music automatically reduces in volume when someone speaks on the microphone, or we can put music at a low volume under someone’s voice.

“These programming shortcuts make the job so much easier, and I have really enjoyed teaching the younger students tricks of the trade,” Oliver said.

Oliver studied Units 1 / 2 of VCE Music Industry Sound Production in Year 10, then topped the State last year during Year 11 when he undertook Units 3 / 4.

“The Study Design for this subject is like a standard VCE course with units of competency. The subject still counts toward the VCE, even though it is a VET subject.

“The certificate I received is mainly related to audio work, but I also love lighting.

“Whether I like audio or lighting more depends on the event. For example, I like lighting for stage productions because you are telling a story with the mood the lighting creates.

“With something like a band, I prefer working on audio because the sound is the crucial element of the performance,” Oliver said.

Acting Head at Girton Grammar School, Dr Emma O’Rielly, said that Ollie is well known around the school and ubiquitous with Girton events.

“Ollie is often in his stage blacks, dashing between cameras or using his radio comms to speak to fellow tech students or our AV Tech crew.

“He is part of the backbone of the Theatre Tech co-curriculum at the school, and the skills he has gained over six years have made him crucial to many of our school events.

“With the disruption to events during COVID-19, Ollie and our Audio-Visual staff, are working hard to upskill the younger students in the Theatre Tech co-curriculum.

“We are incredibly proud of Ollie for achieving the top VCE score in the State for this subject last year and hope that his achievement inspires other students interested in the performing arts industry,” Dr O’Rielly said.

Oliver said that a career in sound and light production is a possibility for him, but he is not yet settled on his career path when he completes Year 12 this year.

“It’s a pretty tough industry requiring a lot of personal drive and huge time commitment. I am thinking about doing a Bachelor of Music, specialising in audio, but am yet to make a final decision,” Oliver said. 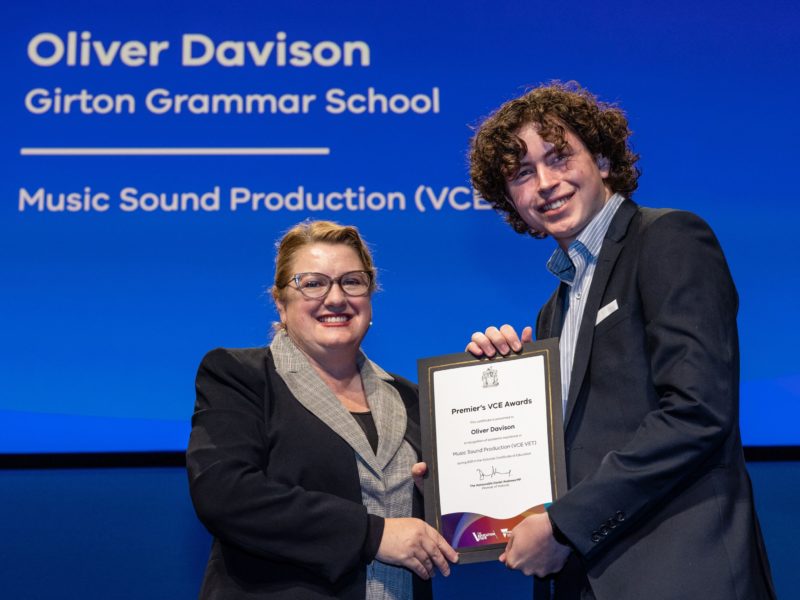