As a distance runner and aerobic gymnastics fanatic, Alexandra Liacos knows how to play the long game, which has put her well and truly on the path to becoming a physiotherapist, having received an ATAR that will allow her to study Physiotherapy at LaTrobe University where she was selected for the Aspire program and will be immersing professionally in what she loves socially.

Alexandra said that it has been an incredibly busy year, especially with duties as School Vice Captain, but that keeping up her sporting passions is what got her through.

“I guess I’m pretty sporty and that’s something that really defines who I am.

“I don’t think you should give up something you love just because of VCE, you just have to find a healthy and realistic balance. After all, VCE is a marathon, not a sprint.”

“I’ve spent a fair bit of time during my VCE years travelling for sport, and it’s been a struggle to manage everything at times, but overall I think being busy actually keeps me on top of everything,” she said.

Alexandra has studied Chemistry, French, Biology, Maths Methods, Physical Education (PE) and English Language during VCE. Her favourite subject has been PE, for which she received a perfect score of 50 last year. She was also the Captain of City2Surf and Swimming. Alexandra also loved French because of the small class size, which allowed a strong rapport to develop with her teacher and peers.

“Our small class and Madame Zenbergs all became very close this year, and relationships are really important to me – it makes much more motivating to go to class when you know it’ll be a blast!

Alexandra believes that it is important for everyone in Year 12 to have a positive attitude and create a culture of support for one another.

“I try to be energetic and enthusiastic at school, because I truly believe that we all have the power to add a little sparkle to someone’s day.

“I think everyone wants to do their best, and we respect that. We check on each other and have a little fun if the stress is building up,” she said.

“Year 12 has without a doubt been my favourite year at school. I’ve actually been more relaxed and enthusiastic about my studies than ever before,” she said. 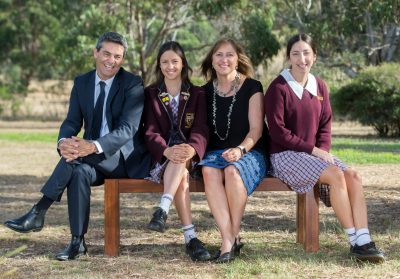