Who should be eligible to sit in our Parliament? That is the issue student delegates will consider at the 23rd National Schools Constitutional Convention, at which student opinions will be recorded in a Communiqué, presented to the Senate and incorporated into Hansard.

Headmaster of Girton Grammar School, Mr Matthew Maruff, said that current School Captain, Samuel Hilson, had been selected to participate in the Convention and as a recent winner of the Club round of the Bendigo Lions Youth of the Year public speaking competition, he was well placed to be an active contributor to the debate.

“The students will review the main issues of Section 44, which sets out the conditions under which disqualification as a Member of Parliament may occur.

“These include bankruptcy, a criminal conviction, allegiance to a foreign power, holding an office of profit under the Crown (or pension), or direct or financial interest in any Commonwealth agreement.

“This is a remarkable opportunity for Sam to be a part of parliamentary democracy in action.

“We encourage our students to be politically aware and to understand the privilege of being part of a representative system that aims to allow all voices to be heard”, Mr Maruff said.

Students will hear from a panel of experts and will discuss in working groups the five sub-sections of Section 44, before they vote in a mock referendum. The National Schools Constitutional Convention programme provides senior students with an opportunity to become better informed about how Australia’s Constitution provides a democratic framework. The Convention will take place from 20 -22 March 2018 in Old Parliament House.

“As a national delegate, Sam was selected from around 1,000 students from government, independent and Catholic schools, many of whom participated in their state or territory Conventions.

“Sam is a student of Global Politics and Economics, and his natural interest in the operation of Government will ensure that he is an active participant in this exceptional opportunity to debate current issues regarding the Australian Constitution,” Mr Maruff said. 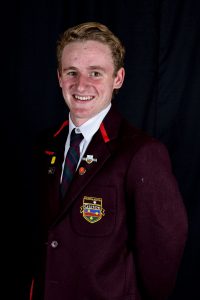