A Year 11 Girton Grammar School student has achieved a formal piano qualification that is usually the reserve of experienced paid professionals of the highest order.

Augustine Leung has been playing the piano since he was three years old, and his daily sixty to ninety minutes of practice were recently rewarded with a Piano Licentiate Performance Diploma (LMUSA).

To be eligible to attempt the LMUSA, a Grade 6 AMEB written exam must be acquired. This entails a three-hour examination that requires applicants to write harmonies, create a melody for a poem, and know about various composers’ different styles and their relevant musical innovations.

Only 10% of applicants are granted the special LMUSA performance diploma, a statistic that Augustine, 16 years old, says he simply ignored before performing.

“When I performed for the two LMUSA examiners in Melbourne, I was focused entirely on playing to the best of my ability and I told myself to worry about passing or failing later.

“I started practising the four performance pieces in 2019 by exploring new music genres to broaden my repertoire and then in 2020 I got serious about trying to achieve the LMUSA.

“Through most of 2020, like everyone, my music lessons were online which was not ideal, but I did find it easier than violin and guitar, which I play in various Girton music ensemble groups,” Augustine said.

Over a forty-minute practical examination period, Augustine played the following pieces for his LMUSA qualification:

Prelude and Fugue No. 24, Op. 87 by Dmitri Shostakovich

Augustine says that piano will always be part of his life. He has ambitions of studying for a medical degree but thinks that teaching piano will be an excellent part time job to support him through his studies. Despite already being more highly qualified than most piano teachers, Augustine’s humility is clear.

“I don’t believe that I have the teaching skills that all the experienced teachers from Girton or other schools have, at least not at the moment.

“However, what I do want to do is to share my experience as a music student with others,” he said.

Augustine is passionate about the part that music plays in all our lives and wants to encourage other young people to embrace the benefits of musical performance.

“To be able to achieve high in music, the fruit is sweet. It can, however, be a tedious process with lots of sweat and tears.

“There are sacrifices that may need to be made like being unable to do things like playing a lot of contact sport. However, I honestly believe everyone should learn music. Aside from being a big part of our human civilisation, it helps with things such as our brain development and character building.

“Lots of kids are put off playing an instrument because of the practice, or they think they don’t have talent.

“But if you think about it, not every kid can go professional in soccer and get the chance to play in the Premier League, but we all love to play it with friends on the weekend or during recess because it’s fun and relaxing. I think music deserves that kind of treatment, too,” he said.

Augustine is from what he describes as a musical family. His father played the oboe, was a singer in the Hong Kong children’s choir and toured Europe to sing as a Soprano. His aunt is a piano teacher, and his younger sister, Lauren, is following quickly in his footsteps, having recently passed her Grade 5 AMEB Examination at just ten years of age.

“I can’t remember when I started playing the piano, but I’ve been playing a long time. 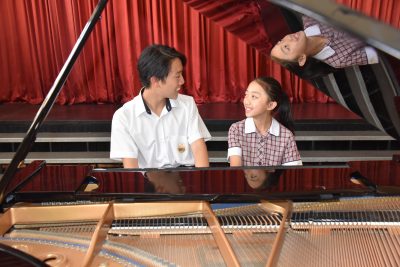 “I am also about to start percussion at Girton in the Band Programme, so I can’t wait for that”, the now eleven-year-old Lauren said.

When asked about the piano playing arrangements at home, Lauren says with a grin;

“Augustine and I can hear each other playing, but we are at opposite ends of the house.

“Augustine got a grand piano in 2019, but he initially chose to stick with the old upright piano, and I had free reign on the grand piano.

When asked what her future musical plans are, Lauren replies in the unassuming manner typical of her big brother.

“I’m not sure. I will just keep playing and see what happens,” she says.