Headmaster of Girton Grammar School, Mr Matthew Maruff, said that Sebastian had achieved an ATAR score of 99.95 giving him the highest ATAR Score possible in the VCE.

“Sebastian deserved his outstanding individual result. He worked hard and his effort was rewarded.

“He is a very humble young man and was surprised by his marks. He is an excellent example of what can be achieved through dedicated application to studies.

“He is now studying Biomedicine at Melbourne University and I have no doubt that with the same application he showed at school, he will go a very long way in both his further studies and his career,” Mr Maruff said.

James Spencer completed his VCE VET subject in Music: Technical Production as a Year 11 student. He is often found in the School’s much loved Black Box Theatre control room, working the sound and light desk or scaling the gantry above the stage. He is instrumental in providing the technical support for a myriad of events at the school and all over Bendigo.

“The VCE VET Music Tech subject is well supported outside the classroom through the provision of a Theatre Tech co-curricular subject which gives students hands on experience working their audio and visual magic in an incredible array of settings.

“They support everything from our Speech Night event with 3,000 people at the Bendigo Stadium to our swim carnivals at the Bendigo Aquatic Centre where they set up an outdoor PA system.

“The sound, light, music and special effects that are performed by these technically minded and creative students is phenomenal and James has proven his expertise by gaining a Premier’s Award today.

“We are incredibly proud of our 2016 VCE cohort, which topped the region for VCE results through hard work and dedicated support from teachers and families,” Mr Maruff said. 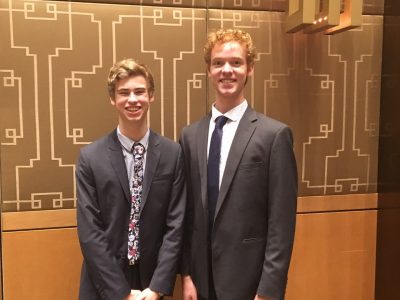