By the end of Year 5, Michaela Hulme was so shy that speaking to other people was an effort, which is not the normal pre-condition for being School Captain.

As a young child, Michaela sang in the car so her parents enrolled her in acting lessons, which Michaela now realises, was probably less about the singing and more about getting her to come out of her shell.

It seems to have worked.

Michaela is School Captain and a lead role in this year’s production of Peter Pan – A Musical Adventure.

After a few very small-scale musicals and the odd singing concert, Michaela took to the stage in the Junior School production of The Jungle Book, although not in a major role.

“I was a tree,” Michaela says simply and with pride. “A singing tree, in fact.” 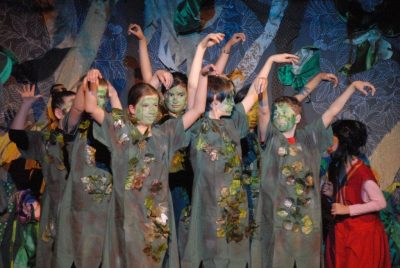 “I remember enjoying The Jungle Book so much. I was incredibly nervous, which is still something I have to endure. But once I am actually on the stage, I am fine and I enjoy myself, no end,” she said.

The next step for Michaela on the acting front was in the Year 8 production of Cinderella, in which she played the Queen.

“Finally, I got a throne and a crown,” she jokes.

“I also got to sing about food, one of my great loves, because I was ordering a thousand pounds of caviar for the Royal Wedding,” she said.

When talking about the benefits of the compulsory nature of the Year 8 production, Michaela, equates the experience for non-Drama students to Cross Country for herself.

“Cross country is my worst nightmare. But at least you can walk. I feel for students who are not inclined to act because they have no choice but to put on a smile and keep singing!” she said.

When Michaela was in Year 9 she took part in her first Senior School production as a paperboy in The 39 Steps as a minor lead role, and in Year 10, she was a milkmaid in Beauty and The Beast.

“I loved Beauty and The Beast. It was incredible performing at a full Ulumbarra Theatre.

“I also really enjoyed hosting a local radio personality who made a cameo performance on the stage for one of the ensemble songs. She did not need much help, but it was fun nonetheless,” Michaela said.

By Year 11, Michaela had moved into the sphere of lead roles and played Helena in A Midsummer Night’s Dream at the Capital Theatre, which she says was her favourite role up until that time. 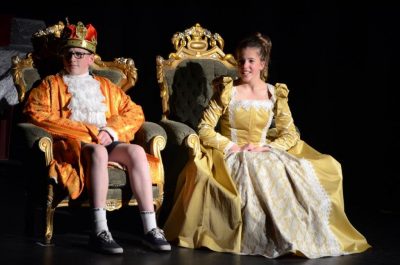 “A Midsummer Night’s Dream was so out there and different to anything else I had done. I found Shakespeare easier to handle than other productions because it was heavily reliant on memorising song lyrics, and that is something I am comfortable with.

“I also really enjoyed the comedic nature of the play,” she said.

Fast forward to this year’s production of Peter Pan and Michaela was surprised and thrilled to find her name cast as the Storyteller.

“Having auditioned not entirely knowing what to expect, I was a little shocked when cast as the Storyteller especially as I was not very familiar with the role of the Storyteller or in fact, the production in general.

“I am very glad I got the Storyteller role, because actually, it really suits me.

“I am on stage quite a bit, but often in a quiet, introverted way, without speaking, which is actually not too far from my natural character, despite what many people think.

“I do have to involve myself heavily in the action on the stage though, because the action represents the Storyteller’s memories and reflections.

“It was quite hard to characterise the Storyteller and I am often out of place with the context of what is happening on the stage,” Michaela explains.

Michaela’s Drama journey at Girton has also involved the One Act Play Festival and in Year 9 she wrote a script that was performed. She loves that the Festival is a display of student work and thoroughly enjoys all of the work behind the scenes, which is much of the reason that she is now studying VCE Theatre Studies.

When asked whether acting or singing is her first love, Michaela says she cannot split them.

“It really depends on what I am immersed in at the time. At the moment, for example, because I am so heavily involved in acting, that is where my heart lies,” she said.

Michaela said that she was too nervous to put her name down for the Senior School production when she was in Year 7 but that she would encourage others to have a go.

“Drama has given me an enormous amount of confidence. It’s cliché but true.

“I still consider myself introverted. Very introverted, which is not uncommon for actors. I am also a very open book. Actually, I’m a bit of a weirdo, but that’s good,” she says with earnest honesty.

When asked how she manages being in a position of leadership whilst being introverted, she explains that she also likes to keep busy so it works for her. She describes being told she was School Captain as the biggest surprise of her life.

“I did not tell my parents about it for weeks! The first they knew about it was when I crossed the stage on Speech Night. I don’t think it was even real for me until that moment.

“I feel so incredibly lucky to be given the position. My parents were so proud of me. And I am so proud I kept the secret so long!” she said.

Michaela hopes to study a design related course next year, perhaps in Theatre Studies or perhaps in Graphic Design. She says that performing will always be a part of her life, whether formally or informally.

She describes herself as an old soul, but in a self-deprecating way. In all likelihood, in time, this delightful young lady will recognise that her old soul is actually borne of a great sense of inner wealth. 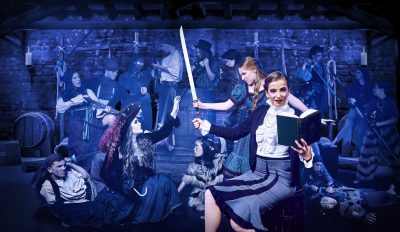